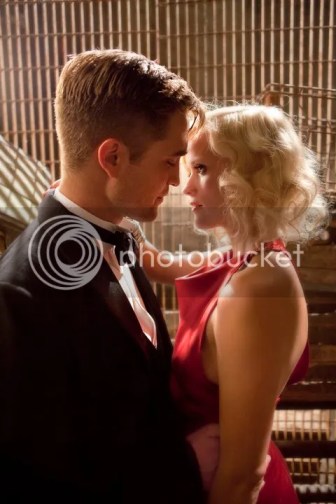 You’ve worked together before, how was that experience?

Can you describe your journey as Marlena?

Reese: It’s amazing. I feel so lucky playing this role. Marlena was abandoned when she was little and she found her way in 1920 America, a time when the country was going through the Depression. It was a great experience playing a woman that has an amazing journey through out the movie going through a violent relationship and finding finally some hope in her life.

Rob, when does Jacob join the circus?

Rob: He’ studying to become a vet in College. He’s about to take his finals when his parents die in an accident. He finds out they put their home on a second mortgage and the clinic where he was supposed to work to pay for his studies. He gets on a train and tries to find job, he realizes he’s on a circus’ train. He sees Marlena the first day and she’s one of the reasons he decides to stay and work for the circus.

Reese: I trained for three months. I visited twice a week at her ranch where she lives with 6 other elephants. I fell off many times, but she is very skilled. She can pick up things the size of a pencil or a person. She picked me up with her mouth the first time we met. It was incredible.

Did you bond with the elephant in real life?

Reese: Yes. Today is the last day on set and I’m very sad about it. Having this amazing relationship with an animal is so magical.
Rob: I’m sad too. It’s weird. These elephants have an amazing aura. You feel so peaceful when you’re with them. I could sit next to her all day.

What about the other animals?

Rob: The lion gets mad pretty easily (laughs).
Reese: The zebras are crazy! One time one of them ran loose and we all had to run away from it, I took Christoph and had to hide behind him.
Rob: I think the zebra ran directly toward me (laughs), so I got out of the way like any sane person would, and I turned around the corner and it looked like Christoph was protecting Reese, but in reality, she was grabbing him like a shield in front of her (laughs).

Was it challenging working with horses?

Reese: It was harder than the training with elephants. I grew up riding horses but I hadn’t done it in a while. n the movie I had to straddle the horse and perform many stunts.

Was it easy for you to play your role, Rob?

Rob: Yes I think I can relate more to animals than to people. I discovered that each animal has its weaknesses. If you bring mints and candy elephants will love you. Giraffes will do anything you want if you wash your hands in fruit juice. There was a giraffe that trainers had been having problems with for 6 months because she refused to do anything. I went to her with my arms soaked in apple juice and she followed me everywhere.

Did you read the book before the movie?

Reese: I hadn’t read the book before making the movie. It was one of the books that I had in my house but had never read, I thought “I’ll read it soon” but never did. I found that it’s a beautiful love story. Sara Gruen, the author, did some major research for this book. It must’ve been a wonderful experience for her when she visited the set and seeing all the things she had imagined being brought to life.
Rob: I hadn’t read the book until I got the part. I was reading it on a plane and I realized a girl next to me was reading it too. Then I had to fly to do some final scenes for Eclipse and another person was reading it on the plane. It was so weird.

This role if very different from your role in Twilight. How exciting is this to you?

Rob: It’s amazing to work with such great actors. I didn’t know what to expect when I signed on. When I met the elephant I thought she was so amazing and I didn’t want anyone else to play this role. This has been an amazing experience from day 1. Everybody is very involved. It will be a great movie.

Fan and supporter of all things Robert Pattinson. Co-chauffeur on CosmopolisFilm.com, co-blogger on RobsessedPattinson.com, co-kinker on WaterForElephantsFilm.com, as well as upcoming films: theroverfilm.com, holdontomefilm.com, missionblacklist.com, mapstothestarsfilm.com, queenofthedesertfilm.com. Co-blogger on RobertPattinsonFilms.com
View all posts by tinkrbe1l3 →
This entry was posted in Reese Witherspoon, Robert Pattinson, Water for Elephants and tagged Don't get lost in translation, International press, Interview, Scans. Bookmark the permalink.