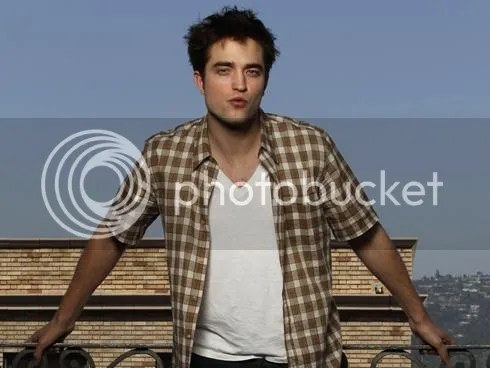 Read the article after the cut!

Sipping on coffee with milk on a sunny morning at the Four Seasons, Pattinson describes attempts to housebreak the “German shepherdy-mix” he recently adopted from a shelter in Louisiana. “He’s called Bear,” Pattinson says matter-of-factly.

“I was trying to potty-train him to go on the balcony of the hotel room,” he says. “It was so windy in Vancouver, the door slammed in his face, and I was just like, nooo.” He sighs: Before Bear was adopted, the pup was found in a trash can outside a bar and has since almost had a run-in with a wolf and a seagull in Vancouver. “He’s got a door phobia anyway.”

Clad in a plaid button-down and jeans, and minus screaming fans, paparazzi, managers and studio minders, Pattinson lets go of his shyness in the time it takes to recap an “unbearably irritating” game of Words With Friends. It’s only in front of a video camera later that he noticeably shrinks, adopting a hunch that matches his quick-to-draw sheepish grin. But one-on-one, conversation spins like cotton candy as Pattinson, 24, discusses hanging up his trademark vampire fangs for the 1930s-set Big Top world of Water for Elephants, a movie he calls “definitely bigger” than any other he has done outside the Twilight franchise.

In Water for Elephants, which hits theaters Friday and is based on the best-selling book by Sara Gruen, Pattinson plays Jacob, a veterinary student who abandons his studies and jumps aboard a steam train for the Benzini Bros. roughshod circus. Jacob quickly falls for star performer Marlena (Reese Witherspoon), who is trapped in a marriage with the circus owner (Christoph Waltz).

Blame it all on the selling power of an gentle giant named Tai.
Cowboys and trains

Director Francis Lawrence (I Am Legend) banked on Pattinson’s love of animals to sell him on the script.

“The first time I met (Lawrence), we went to meet Tai the elephant at her house,” says Pattinson of the 42-year-old elephant who plays lumbering Rosie, the Benzini Bros. main act. Tai showed off tricks the studio originally thought could be accomplished only by a computer-generated elephant.

Charmed, Pattinson read the script on the ride back. Plus, “I always wanted to do something in the ’30s in America,” he says. “It’s kind of my idea of what America really is, that period, kind of the best time to be in America. You’re still kind of a cowboy, but there’s this huge energy. The future was being created then.”

The love triangle complete, Pattinson, Witherspoon and Waltz headed for Piru, Calif., where the desert set was bursting with circus tents, steam trains, hundreds of extras, spangled costumes, circus performers and animals. “There was something about the ruggedness of it, which I hadn’t really done,” Pattinson says.

Lawrence saw immediate chemistry between Pattinson and Witherspoon. “I think he’s never been quite as charming as he’s been in this,” he says. “I think he feels like a real leading man.”

The film put a newly clean-cut Pattinson in the center ring with two Academy Award winners (Witherspoon for 2005’s Walk the Line and Waltz for 2009’s Inglourius Basterds) and a coterie of more than 600 animals. “I’m sure Rob had some insecurities coming up into scenes against Christoph and Reese, but he never showed it,” Lawrence says. “I think he watched and learned and listened.”

And there were distractions. Witherspoon, who occasionally brought her kids to the zoolike set, laughs as she talks about Tai following Pattinson “sort of like man’s best friend — even though she’s 9,000 pounds.” Pattinson recounts “insane” days, including one when the script finds Waltz taunting Pattinson to hand-feed a hungry lion. Pattinson opens the cage, and the lion pounces.

“We did the first take, and sure enough, the lion just ripped the (prosthetic) arm in and wouldn’t give it back,” Pattinson says. “He didn’t even care about the meat. He just wanted to eat the fake arm. I was absolutely terrified.”

“Both Rob and Christoph coined the term ‘no acting required’ in the lion scenes,” Lawrence adds with a chuckle. “You didn’t have to pretend to be afraid when you were around the lion.”

Scarier still was the scene where Pattinson is knocked down by a stallion. “That was terrifying,” says the actor, who admits to a fear of horses.

In Elephants, Pattinson’s name receives equal billing with Witherspoon and Waltz, a nod to his international success with filmgoers.

Yet this is not the first time Pattinson has worked with Witherspoon; seven years (and a pop-culture lifetime) ago, Pattinson was an unknown fresh from the U.K. who scored a role as Witherspoon’s, uh, son in 2004’s Vanity Fair. His role ended up on the cutting-room floor.

Pattinson acknowledges how far he has come. “It’s such a different world, for me especially,” he says. “Then, I literally got (the role) by accident. I got an agent. A week later, I got that job.”

“He was very young, like 17 or 18,” says Witherspoon, who describes him today as “very quiet and introverted” and uninterested in fame.

As The Twilight Saga comes to a close with the two-part feature Breaking Dawn (based on the last book in the Stephenie Meyer series), the question looms as to whether the public is willing to pay to see Pattinson play anyone besides vampire Edward Cullen.

Lawrence acknowledges that the majority of the country knows Pattinson as Edward. “He definitely has more to offer than just what he does in that role,” he says. But “when you head up a big franchise like that, that becomes so popular and the characters become kind of iconic … it’s tricky to break out of that.”

Especially as those films continue to make money. The Twilight films, including New Moon and Eclipse, have made more than $1.8 billion worldwide. In his months off, Pattinson began to expand his résumé, first with last year’s romantic drama Remember Me.

The actor is not immune to the criticism. “I always see these things like, ‘Can he act or not?,’ ” he says. “It’s like, I’m nothing like Edward. What do you think I’m doing in that?” He dissolves into laughter, gesturing with this hands. “So (when a new role arises), everyone’s like ‘It’s very different.’ ”

He just wrapped Breaking Dawn’s final chapter. “It’s completely nuts,” he says. “There are some days on set just watching you go, ‘How is this going to be PG-13?’ ” He laughs. “The whole first movie is like a straight-up horror film.”

Summit Entertainment is releasing Breaking Dawn, Part 1 this November, but Part 2 will not be released until November 2012. Meaning, no matter what other projects Pattinson takes on, the fandom and furor that surround the franchise are Pattinson’s to keep until roughly early 2013.

Would he do a franchise again? “Only if I could have a lot of say in the development of it,” he replies, noting the “if it ain’t broke, don’t fix it” creative mentality of the series.

The spotlight is just as hotly focused on Pattinson’s relationship with girlfriend and Twilight series co-star Kristen Stewart, 21. “I try my best to avoid it happening by never being seen or not saying anything stupid in interviews, but it doesn’t seem to matter,” he says of the rumors and headlines about them.

But his Elephants co-star says his life is more normal than it looks. “He’s very much a 24-year-old guy who has a girlfriend and is enjoying himself and his friends,” Witherspoon says.

It’s hard to convince the fans of that: When paparazzi caught Pattinson kissing Stewart last week after the Elephants premiere, the blogosphere exploded.

“I just don’t like it,” Pattinson says; the rabid attention has forced him to unload his L.A. home and instead live out of hotels. “That’s not part of my job. It’s embarrassing, people using your life as entertainment.

“If people are already using your life as entertainment and they get their fill in magazines, they’re never going to see your movies.”

Aside from answering an interviewer’s question, he vents only to his parents. “They always think I’m completely depressed because I don’t really say it to anyone else. So they always think (being famous) is the most miserable experience in the world. They’re funny. Whenever I sort of complain about it, they go, ‘Well, just quit. What are you talking about, if you hate it so much?’ ”

“You’ve just got to remember why you’re doing it in the first place — which is quite hard sometimes,” he says, chatting about his next projects, Cosmopolis with Paul Giamatti, “a departure from everything I’ve done,” and period piece Bel Ami, which has no release date set.

And so the circus, aided by a bit of technology, must go on.

“The only time I ever follow Twitter is if I’m in a restaurant or something, just before I leave, to see if people are waiting outside. It does make you a bit of a loser, especially when someone asks you, ‘Hey, you want to go to dinner at this place?’ and I’m like, ‘Can we have dinner at this (other) place? It has three exits.’ “