German Premiere via Thinking of Rob

“Now it’s official: Twentieth Century Fox Germany is pleased to announce that the main cast of Water for Elephants: Reese Whiterspoon, Robert Pattinson, Christoph Waltz and Francis Lawrence (I Am Legend, Constatine) will be in Berlin on April 27th for the Premiere of Water for Elephants. The glamorous premiere will be at Cinestar Sony Center in Potsdamer Platz.”

German fans! Click HERE to read contest details. A chance to win tickets to the premiere and a Meet and Greet with Rob!

France (Paris) premiere info via via

Robert Pattinson, Reese Witherspoon, Christoph Waltz and Francis Lawrence are set to attend the Water for Elephants premiere in Paris, April 28th. The premiere is located at the Grand Rex in Paris.

Robert Pattinson will not be attendance due to his filming conflicts. 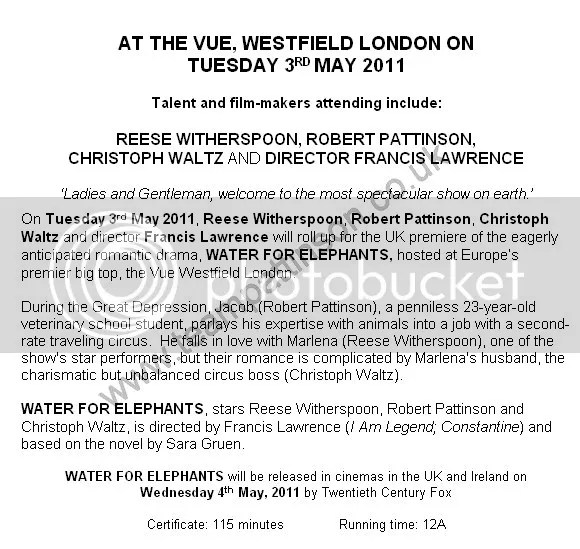 Twentieth Century Fox Film Distributors is excited to announce that Hollywood heartthrob, Robert Pattinson, will be in Australia for the first time for his new epic romantic drama, WATER FOR ELEPHANTS, released in cinemas on May 12th.

On Friday 6th May, Pattinson will be joined by his Oscar winning co-star Christoph Waltz & director Francis Lawrence for a glamorous, star-studded premiere at The State Theatre, Sydney – part of the AHL Group, owners of EVENT Cinemas.

At 9.00am on Wednesday 6th April, in association with Ticketmaster, Twentieth Century Fox will be releasing a limited number of tickets for sale to the general public to the Australian premiere of WATER FOR ELEPHANTS which will take place at The State Theatre in Sydney on Friday 6th May.

Priced at $116.45* a ticket, a strictly limited number of the best seats at The State Theatre will go on sale exclusively via Ticketmaster to the much anticipated black-tie premiere event of the year, attended by leading Hollywood actor Robert Pattinson, co-star, Oscar winner Christoph Waltz & the film’s director Francis Lawrence.

To purchase tickets, go to www.ticketmaster.com.au on 6th April at 9am until sold.

We will continue to update this page with worldwide premiere info.

One Response to Worldwide Premieres 411